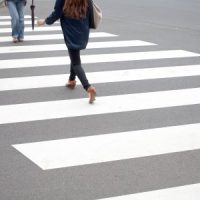 New York City and San Francisco are famous for being walkable cities, and parts of Philadelphia and Chicago are pretty good on that front, too.  The costs of living in those metropolises are prohibitive, though, and it is nothing unusual for New York, Philadelphia, and Chicago to get winter storms that leave more than a foot of snow on the ground; San Francisco does not usually freeze, but it is perennially foggy, with an unmistakable clammy feeling in the air.  You can find charming, reasonably priced, walkable tourist towns in almost any northern state, but for the reasons stated above, they are only charming in the summer.  When it comes to places where you would actually want to walk outside, nothing beats Florida.  Unfortunately for pedestrians, Florida cities were built for cars, not pedestrians.  This is obvious to anyone who has landed at a Florida airport and seen an endless network of highways and parking lots as the plane descended.  Therefore, Florida has a much higher rate of accidents where a motor vehicle strikes a pedestrian than most other states.  If you have been injured in a pedestrian accident, contact a Jacksonville car accident lawyer.

The nonprofit organization Smart Growth America published a report on the U.S. cities with the highest rate of pedestrians being struck by motor vehicles.  The top 20 metropolitan areas for pedestrian accidents were all in the Sun Belt, and seven of the top ten were in Florida.  Orlando was first, and Jacksonville was in tenth place.  The other Florida metropolitan areas in the top ten were Melbourne-Titusville, Daytona Beach, Lakeland-Winter Haven, Tampa-St. Petersburg-Clearwater, and Sarasota-Bradenton.  Elderly people were disproportionately represented among the victims of pedestrian accidents, as were those whose race or ethnicity is Black, Hispanic/Latino, or American Indian.

How Dangerous Are Pedestrian Accidents?

When two motor vehicles collide, the results can be disastrous for the occupants of either or both vehicles.  When a car strikes a pedestrian, though, the pedestrian often suffers severe, or even permanent, injuries even if the driver of the car comes away from the collision with barely a scratch.  As a result of getting hit by a car, the pedestrian may have to spend a long time out of the workforce, therefore losing out on many paychecks.  If you have been injured in a pedestrian accident, you have the right to sue the driver who hit you or the owner of the car involved in the accident.  You can request damages for your medical bills and lost income; you may even be able to request noneconomic damages for pain and suffering.

A North Florida car accident lawyer can help you recover damages through a lawsuit or insurance claim if you suffered a serious injury in an accident where a car hit you while you were on foot.  Contact Douglas & Douglas in Jacksonville, Florida for a free consultation.