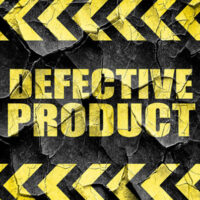 In June, Ford recalled more than 2.5 million of its vehicles due to a serious defect involving the doors opening while the car is being driven. The recall covers the following models, ranging from 2011 to 2016:

This is not the first time Ford has faced this issue, although, according to the company, this time the problem is the fault of the dealerships who failed to fix the issue during previous recalls. Ford is also recalling approximately 300 – 350,000 F150 trucks covering model years 2014 to 2017 due to leaks in the brake master cylinders, which can weaken the front brakes; a very serious safety issue that has already been linked to at least seven accidents and two injuries.

Ford In Denial In Spite Of Repeated Issues

Ford’s door defect problem is reportedly due to a faulty door latch that can crack, especially when subject to high heat. This makes the door difficult to shut properly, even though it appears to be shut, leading it to unexpectedly open after the car is well on the road. Ford claims that it is unaware of any accidents or injuries related to the issue. However, according to the National Highway Traffic Safety Administration public safety reporting database, there have been a number of related complaints. The same issue was also the subject of two previous recalls in 2016 and 2017. In fact, in 2016, the government opened an investigation into the company to determine whether the recall should have covered additional years; an investigation that remains open today.

Due to this issue repeatedly occurring over the last four years, in any future litigation related to the problem, the courts are not likely to be very sympathetic towards the company, which has arguably been provided with ample time and opportunity to correct the problem in order to protect consumers.

In the last few years, Ford has also been linked to knowingly placing defective products on the market: Last year, a judge awarded former Ford Focus owners $23,000 in connection with  car owners harmed by their Ford vehicles’ transmissions. According to an investigation, internal company communications and documents revealed that the company was aware of the defect before placing the cars in the market and even continued to manufacture them with it over the last decade, all while their customers paid for repairs out of pocket. Since then, a settlement was reached over litigation brought in connection with their 2011-2016 Fiesta and Focus compact cars, which were built with defective transmissions.

If You Have Been Harmed by A Defective Product, Contact Our Florida Injury Attorneys

Manufacturers have a duty to only place products on the market that are reasonably safe for use. When things go wrong with these products because they have failed to do so, and people get hurt, they must be held liable for their injuries. If you or a loved one has been injured or experienced loss due to a defective product, contact our Jacksonville product defect attorneys at Douglas & Douglas, Attorneys at Law today to find out how we can help.