Electric Scooters Are Causing Too Many Catastrophic Injuries in Florida & Elsewhere 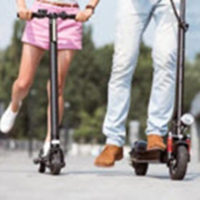 We previously discussed just how dangerous Florida has become for pedestrians. Part of that danger involves the introduction of electric scooters, which are contributing to a worldwide epidemic of injuries and fatalities.

In addition to pedestrians, most of those injured by these devices are users of the scooters and those who trip over them left on sidewalks. They are being ridden and left in the streets, on trails, in front yards, on sidewalks and college campuses, and in a number of other locations where people walk and drive; likely in part because the rules of where they are allowed are unclear and age requirements are ignored.

Riders also often do not wear helmets (less than five percent) and have been known to double up, which is extremely dangerous. Many also do not know how to use the scooters, which results in a significant number of crashes: According to one study, more than 80 percent of those injured on these scooters simply just fell off, while 11 percent hit something.

Surprisingly, cities appear to be doing very little to prevent these issues, even though they represent serious public health risks. In fact, in some states, laws have been passed explicitly allowing adults to operate the scooters without helmets, even though head injuries in particular are significant when it comes to these devices: According to the Center for Disease Control, almost half of those injured on the scooters experience head trauma, where even mild traumatic brain injuries can significantly affect a person’s life and leave them with a number of physical, emotional and mental issues. In addition, more than 30 percent of those injured on or by these devices experience broken bones, and many of those injured are minors under the age of 18.

A number of class action lawsuits have already been filed against several makers of the scooters, such as Bird, Lime, and several other companies. These complaints allege gross negligence on behalf of those injured by scooter users. However, to date, fewer riders have challenged manufacturers; even though they are a majority of those injured on/by them. According to those injured, these companies should have known that their products would be unsafe and dangerous when used in public.

A number of these companies are actively attempting to get users to sign waivers before using the devices; waiving their right to sue the companies. Be careful about signing any waiver like this—no document should excuse a manufacturer from making a product that leads to frequent catastrophic injuries.

If you or a loved one has been injured by an electric scooter in Florida, contact our experienced Jacksonville bicycle & pedestrian accident attorneys at Douglas & Douglas, Attorneys at Law today to find out how we can help.